One of, if not, THE first thing you will need to do is find which one of the 4 Inmarsat satellites covers your part of the planet. Or even more specifically, which of them is visible from your desired antenna location.
There are two versions of the following diagram floating around on the Internet, be sure and consult the correct one (the one shown here). One is pre-migration, the other is post-migration. Inmarsat moved the orbits for better coverage and other technical reasons in 2018. 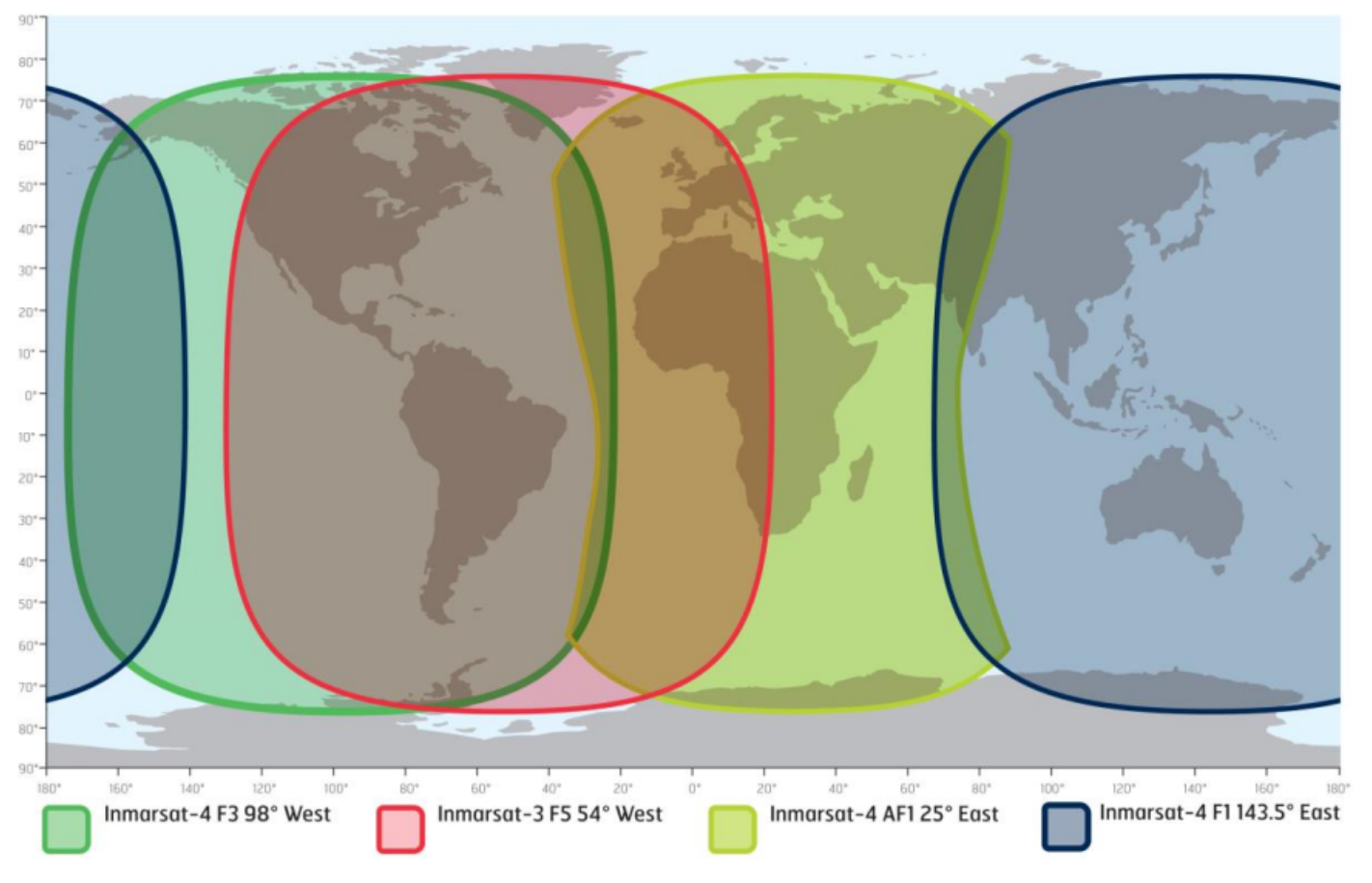 Each satellite covers part of the planet with some overlap. Each satellite uses different frequencies from those satellites that overlap with the one next to it. We list the frequencies for L-Band further down on this page.
Your choice will come down to what you can see, what local obstructions are between you and the satellite and if you are planing on receiving L-Band or C-Band aero data or both. 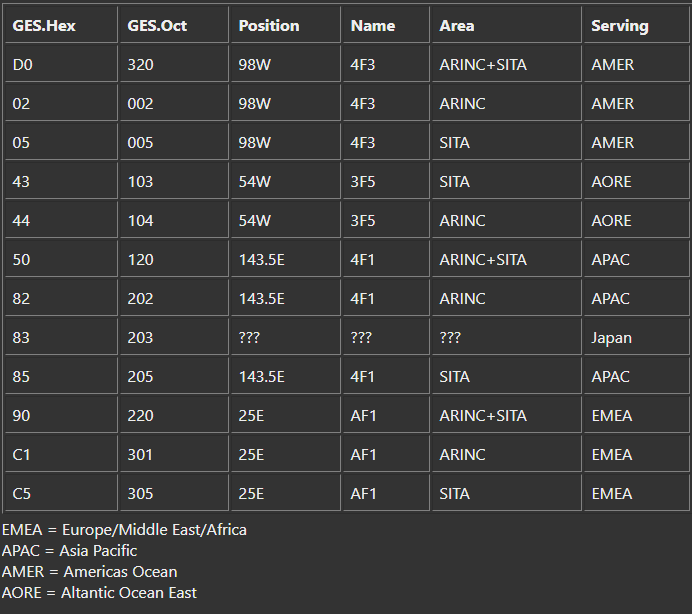 You will see these Hex and Octal codes in the Jaero output, more of them latter, but this table will help you see what areas are covered by each satellite.

As mentioned, you might find (unless you live in Asia Pacific where you only have one satellite visible no matter where you live) that you have two satellite options. Keep in mind that the L-Band beam width from the satellite is rather broad and can be received and decoded even when near the edge of the coverage as per the diagram. C-Band is a lot more narrow beam and you will find receiving and decoding a LOT harder (if not impossible) when at the edge of the coverage shown in the diagram. (For example, I am in Southern California and after several attempts still can not get decodable C-Band signal from 54W with a 6 foot (~2m) dish (the red in the diagram) but get solid decodes from L-Band).

As mentioned, local obstructions will play a role in what your options are.
I used an Android app to show a virtual reality view of where the satellite is located in the sky. I HIGHLY recommend you download the app and see what your options are.
There are many such apps and I would think that there would be some options in the Apple store, but don’t have an Apple device so cant call any out.
Here is the Android one I used: https://play.google.com/store/apps/details?id=ftl.satellitedishpointer.sdp
Here are the two satellites options I have in Southern California as per the diagram. Firstly, 98W, the main sat for my region. 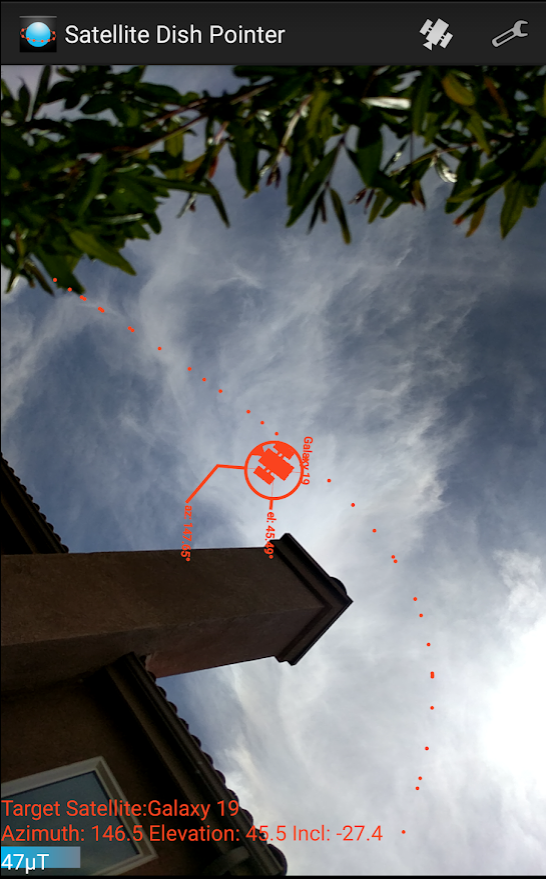 As you can see, it is well above my house and in the clear sky for its entire orbit.
You need to keep in mind that the satellite will move +3 and -3 degrees either side of the equator, so be sure and visualize some movement around a 23 hour 58 minute cycle. In other words, even though the Inmarsats are called geostationary, they are not ‘fixed’ in the sky. Allow some margin for movement.

With this satellite you can start to see why I pointed out the +-3 deg movement. From this location that slow oscillation will take the satellite very close to or slightly below my horizon for 12 hours at a time.
From the roof of my house however, I get full coverage of the L-Band over the whole orbit with no signal fade.

Perhaps it would help to see the orbit on a graph:

The red line is the +-3 Deg orbit Latitude shift around the equator. The green line is the slow wobble over Longitude (Yes, I have the scale incorrectly labeled in this graph when I took the screenshot). We will talk a lot more about both of these drifts when we get to the section about C-Band reception as you need to move your dish to track this orbit wobble.

If you could look at the orbit in the sky over time, it looks like a big squashed 8. Up and down and slow drift to the side.

Here is yet another way to visualize the drift in the satellite orbit: 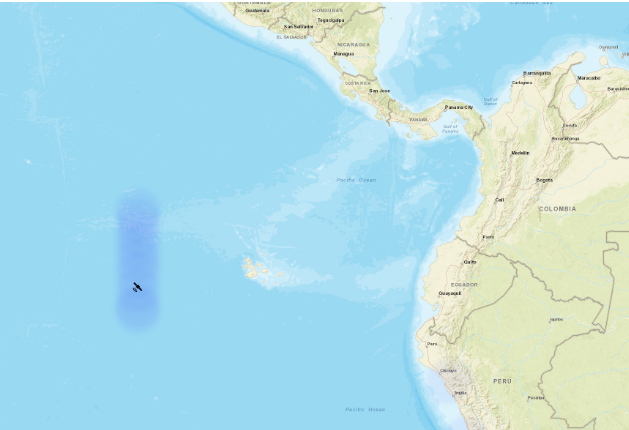 This is heatmap of Inmarsat 98W orbit taken over 2-3 days.

And with that, you really should now head over to the L-Band page and review your antenna options now that you know where to point it.